While the CasaTunes 6X6 matrix amplifier meets the needs of most installations, sooner or later, you will probably come across an installation that requires special consideration. For example:

The CasaTunes 6X6 matrix amplifier is extremely flexible. Not only does the matrix amplifier provide six rooms with 50W of power, it also provides a pre-amplified output for each room, and a 12V signal that is triggered when a room is powered. Using these capabilities, we can solve many of the special installation requirements that arise. 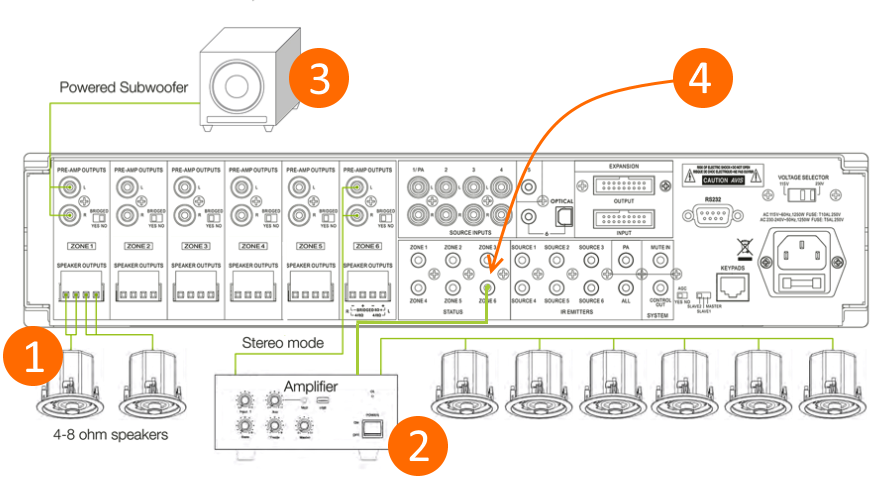 Integrating an AV Receiver to power the music in a room

Many homeowners considering a multi-room system already have one or more AV Receivers installed in their home. More often than not, these receivers are configured as stand alone devices and while great for watching TV and movies, they are not part of your whole house music solution. Wouldn't it be great if there was a way to integrate these, and simply?

If you need more power in a room, or you need to power an area that contains many speakers, you can add a power amplifier of choice, as shown in the diagram above (#2). The amplifier could be a more powerful 2-channel amplifier, it could be an amplifier like the CasaTunes 1240 Amplifier, which allows you to power six pairs of speakers, or it could be a 70V amplifier system, commonly used in commercial environments and used to power an almost infinite number of speakers. No matter what your special situation is, chances are you can use the pre-amp outputs from the matrix amplifier to connect to your power amplifier, and use the 12V trigger (#4 above) to control the power amplifier, turning it in and out of standby mode.

You can connect a powered subwoofer as illustrated in the diagram (#3 above).

The best part though, is your CasaTunes Apps work the same way, regardless of how the music in a room or area is powered, making it completely seamless to customers. Plus, you get all the same great features CasaTunes adds to rooms, including; waking up and sleeping to music, using the CasaTunes keypads to control these rooms, including these rooms in room groups, etc.