2-way driver gives RTI dealers the best tools for designing and integrating the control of your music system. The CasaTunes driver allows dealers to use multiple ways to set up controls for changing the selected room, music players and selecting and displaying music.

All the great CasaTunes Features. The CasaTunes driver lets you use all of your CasaTunes internal streaming music players and any external music sources. Dealers can create "Room Groups" which lets you group any combination of rooms and control them just like a single room. Play any source in any room.

Includes CasaTunes Air. With CasaTunes Air, you will be able to pick up any iPhone, iPad, Mac or any PC playing iTunes and send the music to any room or combination of rooms through CasaTunes. Also, CasaTunes Air lets you add AirPlay rooms to easily expand your system.

Includes multiple sample UIs, both in traditional RTI style and special examples that make the iOS and Android RTI Panel UIs look like the CasaTunes Apps, so your customers can switch back and forth without confusion.

The driver generates handy events to allow powerful integration with other controlled systems and allows the dealer to integrate important functions in macros to do such things as "Turn off the TV, turn on the lights to dim, switch to CasaTunes Player 1 and turn on the CasaTunes zone power".

Different controls can control different zones at the same time and, because it is a 2-way driver, if someone changes something in the currently playing room, it is automatically updated in any control that is displaying that room.

Simply connect the provided serial cable from your CasaTunes Music Streamer to the RTI Audio Distribution System and CasaTunes will switch sources, change volume, bass and treble and turn the room power on and off. To control more than one system, you will need to purchase a CasaTunes USB to serial cable for each unit. 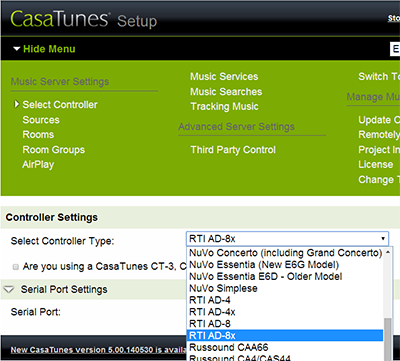